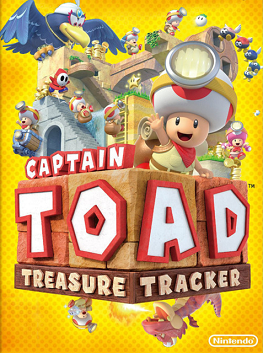 We’ve been playing Captain Toad Treasure Tracker for a few weeks now. I always think it’s better to review a game, especially a family game, in as natural an environment as possible, rather than doing some sort of speed play through in a day or so because you actually get to enjoy the game. That’s sort of important you know!

Captain Toad Treasure Tracker might initially look like a 3D platform game in the ilk of Super Mario 3D World but it’s a very different kettle of fish once you actually start playing it. You see, Captain Toad Treasure Tracker is actually a well disguised puzzle game. For the first time Toad headlines his own game and Nintendo have obviously put a lot of thought into it. Toad is different to a lot of the characters in the Mario universe- in this game he can’t jump. This “no jump” mechanism is at the heart of the puzzles. Toad has to get across each world and collect a star to progress to the next, navigating across various mechanical puzzles and avoiding the monsters. A simple gap or a ledge that Mario could be up or over with a button press suddenly become the subject of much head scratching and invariably see Toad traipsing around half the level to reach.

It sounds simple and like most great games it is simple. And then very soon it gets fiendish. Very fiendish. How fiendish? There’s a level that isn’t more than half a dozen in called Shy Guy Heights that’s full of Shy Guys. There are rules that the Shy Guys follow- they can’t see you if you’re behind them, and the blue Shy Guys don’t even move unless they see you. The first part of the level is a maze that you have to sneak behind the Shy Guys to get through, the second part involves some more stealthy creeping to get past more of them and the last bit, climbing up to the top of a tower saw me die about 3 times and have to do the rest of it all over again.

I thought it was a hard level until I got up to Drop-Road Dash, which haunts my dreams to this day, almost a fortnight on. It’s a level where there are only particularly parts where you can dally as the majority of the level is made up of blocks that fall away after Toad stands on them for a couple of seconds. There are various baddies to avoid but right near the end there is my nemesis: a speed up block that makes Toad run really fast. Normally this aren’t a problem but in this instance it forced you to run along a single block width strip that had a chicane in it. I must have fallen off at that part a hundred times. I fell off so often (to my death), the game took pity on me and made me indestructible. That helped getting past all the monsters but didn’t stop me plunging to my doom. Repeatedly.

The thing is, I couldn’t stop until I’d done it. Yes, I was frustrated, terribly frustrated in fact but dammit, I wanted to complete the level. I can still hear the bouncy tune in my head from that level and the last time that happened was when I was in my full on Gameboy Tetris addiction half a life time ago. And that ladies and gentlemen, is the sign of a rather good game.

I also particularly liked the level where Toad is cloned and you have to navigate both Toads through a maze at the same time with the movement being mirrored. Tricky but a clever idea.

Like the majority of the Nintendo first party games, Captain Toad Treasure Tracker makes brilliant use of the Wii U gamepad. An intrinsic part of the game is tilting and rotating each world to try and work out the best route to take and whilst you can do this with the right thumb stick, you can also do it by tilting the gamepad. Some of the puzzles also require you to blow into the mic to raise platforms or slide blocks on the touch screen with your finger. There are plenty of different interactions across the 63 basic levels (including some wonderful boss levels) to keep you interested and engaged.

As an added bonus, if the game detects a Super Mario 3D World save, it unlocks some extras which are nice. Collecting diamonds also unlocks various extras, including coin runs and in some instances, you can’t unlock the next level until you’ve collected enough diamonds- this makes sure you properly explore the worlds.

Nintendo developed games for their consoles tend to fall into the must buy category and Captain Toad Treasure Tracker is no exception. It’s quite different to the usual platform or racing based games that Nintendo have in their stable and that gives it an exciting and new feel.

Captain Toad Treasure Tracker is suitable for ages 3+ but is very tricky in places. When I play it with the kids, I tend to let them have (an often futile) wander round the level until they get stuck, then I take over and they shout instructions at me- often they know what they need to do but their hand/eye coordination and timing isn’t quite up to it. This works quite well as they get the satisfaction of doing something with me as well as completing a particularly taxing level.

Captain Toad Treasure Tracker is available to preorder now, and is in my opinion an essential purchase for any Wii U owner. It’s released on 2 January, so make sure you keep some of that Christmas money aside.