I’m kneeling on the floor
Staring at the wall
Like the spider in the window
I wish that I could speak
Is there fantasy in refuge?
God in politicians?
Should I turn on my religion?
These demons in my head tell me to

The question is there God in politicians? is one that often troubles me. Many politicians of all political bent can and do wave the God bothering flag when spin doctors tell them the opinion polls show they should. 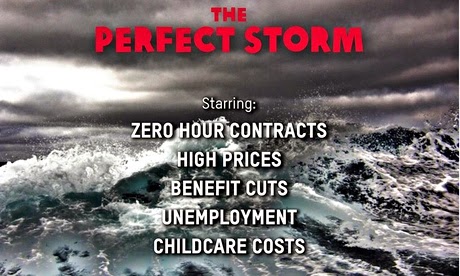 Oxfam has shown that charities have to tread carefully on speaking out against social hardship lest they are deemed to be meddling in politics, which is verboten for charities. Ironically Oxfam had a strong religious (Quaker) influence when it was founded, and it is perhaps this sense of moral responsibility that drove it to take out it’s perfect storm posters in the first place, laying poverty squarely at the door of Government policy.

The sad thing is, if we were to look back at the great reformers in our parliamentary history, Conservative (with a big and little “c”), Liberal and Labour alike, there is a strong theme of Christian belief behind almost all of the progressives, from William Wilberforce, an evangelical Christian, who’s work lead to the abolishment of slavery, through to Lloyd George (the Chancellor behind the People’s Budget of 1909, which paved the way for the modern welfare state), who had a strong nonconformist upbringing which coloured his views on the rights of the underclasses. Yes, some of the politicians that did such great reforming work may have had some decidedly odd views on other things we’d now consider rather unchristian but by and large things like the Temperance movement, the Rational Recreation movement (which gave us a lot of privately funded public parks), simply wouldn’t have happened without the religious conviction of the individuals involved.

So it’s in this context that the Bishop’s of the Church of England have written an open letter entitled Who is my Neighbour? to every parishioner under their care about the state of British politics, with some very strong wording about government policy like;

“There is a deep contradiction in the attitudes of a society which celebrates equality in principle yet treats some people, especially the poor and vulnerable, as unwanted, unvalued and unnoticed.”

This has been rightly construed by many commentators as an attack, similar to Oxfam’s, on a culture of demonising the poor and unemployed, who have borne the brunt of austerity cuts, in policy that has long ceased to be about balancing the books and moved onto ideology.

Yes it is easy to pick paragraphs out of the 52 page letter (it’s a big colourful document; all that’s missing is “Don’t Panic” in friendly letters on the cover), and it does specifically says, “If anyone claims that this letter is really saying vote for this party or that party, they have misunderstood”, early on but given the context- this is the first such letter that the Council of Bishop’s have ever written preceding a General Election, given that Archbishop Welby has spoken out about pay day lenders, tax evasion and has said he was left more shocked by the plight of UK’s hungry poor than by suffering in African refugee camps, there is little lee-way to see anything other than a repudiation of the Westminster incumbents policies. After all as a friend of mine (married to a Vicar) recently said, “Human dignity, common decency and compassion are not politics. Certainly not the politics of Westminster, and certainly not Tory politics.” he also went on to say, “Labour is hardly the party of a march from Jarrow is it?” which is just as telling, showing that the swing to the centre right from Labour has left a lot of people politically disenfranchised as well as marginalised by society.

God has been exorcised from politics and replaced with a new master. There has been a suspicion that I amongst others have held for a while now over just who the recovery is actually for. Again, Oxfam has pointed out that globally the number of billionaires has doubled since the financial crisis, while the man on the Clapham Omnibus has struggled on. You can even see it in HMRC- they have considerably less resources focused on investigating big corporate tax evasion than they do on ensuring 30 somethings from Margate get custodial sentences for over-claiming benefits. When you have regular celebration of new jobs by the Government that are either zero hour contracts or below the living wage, where you have more children from working families living in poverty than at any time on record, you have to wonder whether big business now runs the country in all by name.

Of course the unspoken irony is the very votes the Conversatives are wooing with a massive shift of wealth from the young to the old are those that predominately fill the Church pews on a Sunday. Therein lies the problem- Conservative and UKippers are mostly elderly, both parties have the lion’s share of their votes in the >65 category. The Pensioners Bond’s that The Prince of Darkness has thrown to the elderly show how important their votes are to him yet for the most part these people will be receiving their copy of Who is my Neighbour? soon and they will have to face up to a real choice: vote for personal interest or vote as their Christian upbringing and moral compass tells them to.

Good luck to them; it’s a decision I wouldn’t like to have to make in their position.