I don’t really remember when I became a reader. I suspect it was sometime after our move from Lowestoft to Hoddesdon. We moved from a setting I was happy and confident in when I was 7 to a strange new area and new school where I didn’t fit in- my Mum was a very much lapsed Catholic but since we moved right next door to a Catholic primary school my brother and I were enrolled there for better or for worse. I went from never having met an Italian before to being in a class that was perhaps 80% Italian and full of Enzos, Salvatoris, Antinios, and Sylvanias. It was more than the language that confused me though, it was the whole pomp of the Roman Catholic Church (replete with a proper old fashioned fire and brimstone Irish Priest).

I’d been quite a popular and outgoing kid in Suffolk but I almost immediately didn’t fit in properly and became more and more insular. If I’d been a Simon & Garfunkel fan back then, I’d have been humming I am a Rock to myself:

I have my books
And my poetry to protect me;
I am shielded in my armor,
Hiding in my room, safe within my womb.
I touch no one and no one touches me.
I am a rock,
I am an island. 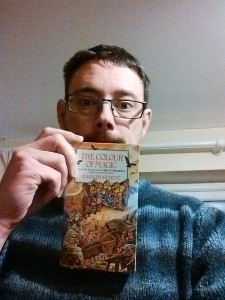 What I did do is start reading in a way that I never really had before. Firstly it was the Famous Five and Secret Seven books of Enid Blyton, then it was The Three Investigators and then, one day in the mid to late 80’s I picked up a book in the library that changed the course of my reading life forever. I can’t tell you when I first read The Colour of Magic but I was still in primary school. I actually owned my first (and only) copy of it around 1988 when I’d decided to allow a second obsession to join my Doctor Who novel collecting obsession. There is to this day something marvellous about Josh Kirby’s cover illustrations to Pratchetts earlier works. They capture the other-worldliness beautifully.

Pratchett lead to Drangonlance, which lead to The Chronicles of Thomas Covenant (by the age of 12, I was a precocious reader), and on to David Eddings, Raymond Feist, Robert Jordan, Tad Williams and so many more. This love of reading that saw me read Dracula in one sitting once, carries on to this day, only pausing for a brief hiatus when I was studying English Lit at university. Suffice to say studying English is one sure fire way to put you off reading literature in your free time.

I’ve read books for fun when I’m happy and I’ve read books to escape the world when I’ve been deeply unhappy. Throughout it all though, for the most part I’ve bought two Terry Pratchett books a year; one in the summer and one at Christmas. I’ve bought them all from Pyramids onwards in hardback, and treasured them all. Of course they mean something different to me now than when I was little and I have to say I have a preference for the earlier novels (up to around Jingo probably), with the exception of the Tiffany Aching books, ostensibly young adult novels but to me truer to the original feel of Discworld.

That’s part of the appeal to me though; Pratchett’s books aren’t kids books that work for adults or adults books that kids can read, they’re properly universal. Today in a market that’s as segmented as a marketing department can possibly make it, that’s sort of unique.

One of the things about Pratchett though was, as Neil Gaiman said last Autumn, he wasn’t a jolly man, he was powered by rage. This came across in a lot of the genre interviews you read with him because Pratchett was busy selling millions of books before you really had celebrity novelists and certainly well before fantasy became acceptable and you felt at the time he resented the lack of mainstream recognition and when it came he resented the bandwagon jumping.

He was always acerbic in his views on religion, both in his books (Small Gods) and interviews but for me his crowning moment of grumpiness came when JK Rowling expansively proclaimed to have rescued fantasy from a twee world of Morris Dancing and Greensleeves.  In reference to Rowling herself, he took issue with her claim that, prior to the publication of her first novel, she didn’t realise that she was writing fantasy. “I’m not the world’s greatest expert,” Pratchett said “but I would have thought that the wizards, witches, trolls, unicorns, hidden worlds, jumping chocolate frogs, owl mail, magic food, ghosts, broomsticks and spells would have given her a clue?”

My favourite character is definitely Rincewind the Wizard (closely followed by DEATH) but it was Pratchett’s clever use of language that won me over more than anything.

“From; that was the most important factor in any mindless escape. You were always running from. To could look after itself.”

Terry passed away today, aged 66 after an 8 year struggle with early onset Alzheimer’s. His mindless escape has suceeded; he’s outrun the Alzheimer’s and I’m sure all his fans are pleased for him and deeply, deeply sad. There will be many fully grown men and women shedding a tear for him today, and I know I’m one of them. RIP you grumpy old sod.

I still look forward to the day when my kids are old enough to start reading his books. I’ll get them their own copies, mine are too precious for them. And so the cycle will begin once more.