There’s been lots written about Jeremy Clarkson in the press over the last couple of weeks after the infamous “fracas”. There has also been a lot on social media. One of his columnist chums from the Sun even set up an online petition which had more than 1m signatures.

I can even understand a little how some people have defended him; for example I quite enjoy Orson Scott Card’s Ender series of books. The man himself is a terrible homophobe (for mostly religious reasons I understand) but I put that aside when I’m reading his fiction. People who enjoy Top Gear want to put aside the assault that Clarkson did on a junior member of staff because they enjoy watching the TV show he appears in and I can see the parallel, so it’s not as if I’m immune to understanding what’s going on.

Of course it’s been much worse than people simply sticking up for Clarkson- the poor lad on the receiving end has been subjected to social media hate campaigns (despite the fact he didn’t report Clarkson, Jeremy actually shopped himself)- and it’s not as if the chap was new to the show; he’d worked on it for ten years.

Ten years, imagine if a senior work colleague you’d know for ten years did the following to you: 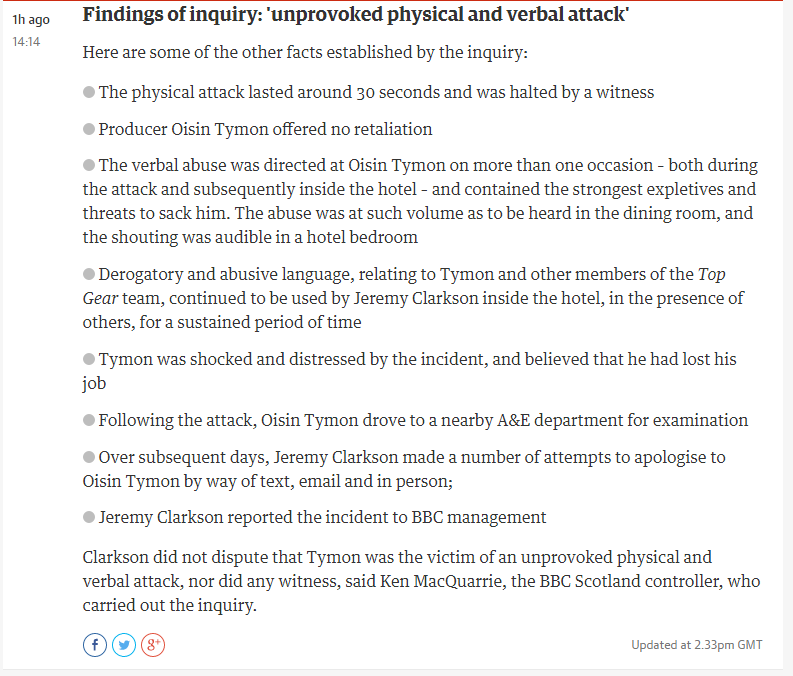 That the media and social media is full of people sounding baffled that the BBC is effectively flushing £50m of foreign sales down the toilet by sacking someone who’s committed common assault, beggars belief. The number of celebs commenting that Clarkson is a character who will bounce back, and offering support for him, is equally strange- it’s not as if Clarkson has been hard done by, he’s lucky plod hasn’t arresting him for assault, so to simply lose his job for what he did is exactly what anyone could and should expect. I’m really disappointed by Hammond and May’s response too. The slightly useless lad bonhomie is ruined by the pair of them expressing their disappointment that assaulting people gets you the sack. What’s the world coming to eh lads?

Reading around it, the assault is bad enough but the tirade about making sure Tymon would be sacked and not work on the show again is also unspeakably horrible. Again, the context is that these are two people who have worked together for ten years.

I’m sad to see the end of Top Gear (in it’s current format) because I liked it. I liked it a lot more 5 or ten years ago before they started recycling jokes and the format got a bit tired but the TG special to the North Pole is one of the finest TV programmes I’ve seen the BBC output; it was genius from beginning to end. But I’m glad that Clarkson has been sacked because I would be completely and utterly stumped if one of my kids asked me “Daddy, why did that man not get into trouble for hitting someone? Is it okay to hit someone?“.

There’s no real answer to that is there?

Bullying is still a real issue in schools, especially among boys, and the idea that a campaign has been run to basically say “as long as you’re popular bullying is okay”, strikes me as exceptionally depressing.