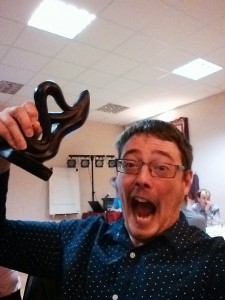 When I was asked to test out Microsoft’s digital assistant Cortana, I was initially sceptical (spelt with a c because we’re British, not with a k which is the American version, although it is an acceptable alternative spelling). That’s because I’m one of those terrible know it alls who has an opinion on everything, regardless of whether it’s right or not and if it’s subjective, my view is definitely right.

Although I may have been on the quiz team that halted the inexorable progress of the tax department to their third straight works quiz night win, it doesn’t mean I genuinely know anything more than mere mortals do, I just have a propensity for knowing useless and trivial information. And I also freely admit that it was me who correctly identified the theme tune to the Golden Girls on that fateful trophy filled night of joy. Oh the shame.

I was even recently accused of being the person most likely to know what the plastic bit on the end of a shoelace is called by someone I knew at university. It’s an aglet if you’re interested, even though spellcheck is adamant it’s not actually a word. 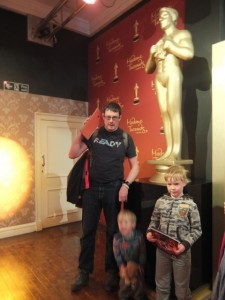 Anyway, in order to test Cortana properly, I was given a series of challenges by a man in a white coat, (actually it was more of a series of questions and the chap wasn’t wearing a white coat, he was quite trendily dressed but you get the point) and despatched to Madame Tussaud’s to find some answers to some trivia questions that even I was having trouble with (no, I didn’t know how tall Jennifer Lawrence is but now I do thanks to Cortana and I can rank her by height among a fairly large group of her peers).

That’s not really the Windows phone I was given for the challenge welded to my ear- it’s the card with the questions on but I’m a sucker for a photo opportunity. Notice how Ned is moving so fast, that he’s phasing in and out of existence. He tends to do this when he realises there are biscuits in the biscuit tin but has started doing it when a camera is about too.

Microsoft supplied one of their Lumia 735 smartphones to give Cortana a good field testing with. It’s a unibody device which a great screen and a battery life that’s miles better than anything I’ve ever managed on an Android device. It’s a lot lighter than the Nokia 1020 I passed over to wifey last year, and a lot cheaper too. Yes, the camera isn’t as good but I don’t find myself taking quite as many pictures as wifey does, and at the time she had a need to take a lot for her childminding logs, so it was a sacrifice I willingly made.

I love the Windows Phone interface, it’s the only mobile phone OS that’s genuinely different in terms of it’s user interface- there is no grid of apps to click on, it’s just fully customisable live tiles all the way. It’s modern; a smartphone interface for now, not an incrementally updated look that fundamentally hasn’t changed in the last 5 or 6 years.

Cortana itself is represented by a live tile of it’s own. Clicking on it for the first time, Cortana leads you through a series of questions about your interests (don’t forget since MS aren’t Google, they probably don’t already know more about you than you do yourself), in order to get an idea of the sort of thing the PA style newsfeed should have. For me it decided business news, politics and technology were my key interests, which wasn’t bad at all. Cortana has an awful lot of neat features to act as a personal assistant- for example you can set it up to come up with a reminder when you call a specific person or a specific person calls you- you can literally get to to say “SAY THANK YOU FOR THE BIRTHDAY PRESENT” the next time your mum rings if you’re the sort of person who would (cough) forget that sort of thing. Cortana will also do calendar reminders, but you can get it to be a lot more clever than that- proximity reminders like remind me to get milk if I go into my Sainsbury Local, are now no longer the stuff of science fiction (and if they ever were, you’ve been watching or reading the entirely wrong sort of science fiction). What it is useful for doing is setting proximity reminder. If I were to say “Next time I’m in Sainsbury remind me to buy milk”, Cortana will respond with a question of it’s own- asking me to highlight the particular Sainsbury and confirm the reminder. That’s genius for someone like me who regularly sits in the office car park waiting for someone who has remembered their keys to appear. 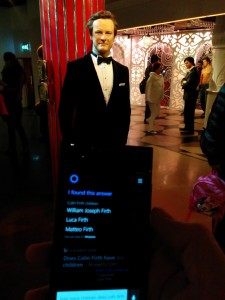 However the piste de resistance is without a doubt the clever way that Cortana can answer your questions. Say for example you’re standing in front of a wax work of Colin Firth and you want to know how many kids he has (because someone has posed that particular question to you FOR EXAMPLE), you can fire up Cortana and press the microphone icon and ask “How many children does Colin Firth have?” and Cortana will answer it for you. The clever thing is though, you can ask a contextual follow up question like “What are they called?” and it will contextually answer the question with the names of Colin’s enormous hoard of kids. Now that is clever.

Ned’s attempts to shout “I need a poo poo” to Cortana were slightly less successful but bear in mind his is only three and Cortana is good but not that good. I can still at least claim to be best when it comes to finding a toilet quickly for a three year old in desperate need of a poo. What is impressive though is how Cortana knows who Benedict Cumberbatch’s mum is, even with my pronunciation of Benedict Cumberbatch.

Actually I take that back, the thing that really really impressed me about Cortana was when I asked it who Ronaldo’s mum was. It came up with the (right) answer of Christiano Ronaldo, so I thought that’s a bit unfair to the Brazilian legend with the same name, who after all got there first, so I asked the follow up question, “Who was fat Ronaldo’s mum?” and it gave me a good attempt at the answer: 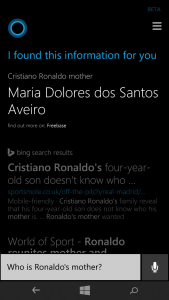 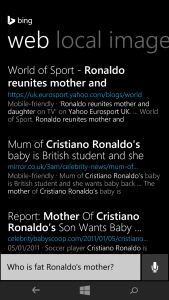 If I wasn’t quite so awesome at quizzes I would definitely be tempted to cheat outrageously using Cortana, the temptation would be just too much. Fortunately I’m just too awesome, so my integrity doesn’t have to be tested.

A big thank you to Microsoft for making this experiment possible, they supplied the phone and the tickets to Madame Tussaud’s. And in case you’re wondering, Jennifer Lawrence is 5 feet nine inches tall.