This year will mark our third trip to the Nozstock Festival. We’ve done Wilderness and Bestival in the past but from experience, with three little kids, a boutique festival like Nozstock is much preferable as it has everything on a much smaller, more intimate site, allowing the kids to get close up to the acts (the 8 year old is a big fan of Mr B the Gentleman Rhymer as a result of this), and traipse between the stages without knackering themselves too much.

Still, a veterans of many a camping festival, I thought it best to offer some advice in case you’re thinking of taking your little ones along. 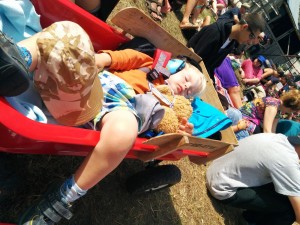 Firstly you should beg, borrow or buy a Radio Flyer cart. If you haven’t heard of these, you’ve probably seen them. They’re little red carts with a pull handle and they’re invaluable for getting all your stuff onsite. Lets face it, with kids, you’re going to have more stuff than you can cram into a rucksack, so one of these is a great way to transport your gear and let the littlest go to sleep in.

Secondly, make sure you get some ear defenders for the kids. Children have much more delicate hearing than we do. As kids get older, they gradually lose the range that they can hear until they end up like us, desperately twiddling the bass and treble settings on the car stereo in some half hearted attempt to get a sound that doesn’t sound terrible. Ear defenders also allow you to ruin your hearing with the loud stuff without upsetting the kids, so they are a must.

These two things are important for the out and about but for your actual camping experience, there are a couple of must haves. Firstly, you need a bog in a bag. Once you’ve stopped laughing, a bog in a bag is basically a camping stool with a cut out in the seat that lets you put a special bag over and through the hole, so you can go to the loo in the middle of the night without getting fully dressed with a child (or fully awake if you’re lucky). It has a special absorbent pad in the bag that sucks up any fluids, reducing the risk of night time spills. Secondly, you need a cheapo camping stove and a cool bag. Depending on how hot it is, the cool bag will keep your milk fresh for the weekend, and if not, you can always consider one that chills via the cigarette adapter on your car. 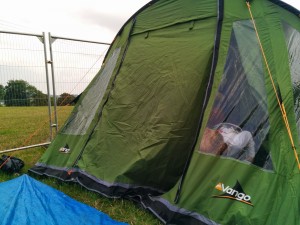 A lot of the guides for the summer festival season will include really expensive gear. Don’t get me wrong, there is a place for spending lots of money on really top gear but I wouldn’t expect that place to be a festival, even one like Nozstock that has the best policed family camping area I’ve ever come across. Our tent is a 5 man Vango tent that cost well under £300 (it helps if you shop around for last years model as tents don’t exactly advance in leaps and bounds year on year). It’s quick to put up, which is good if the weather isn’t brilliant, and can be put up by one person in a pinch (if you’ve arrived late and the rest of your party want to go and catch some music). If you’re lucky, you’ll only be crashing it in at night, so if you fill it with sleeping bags, carrymats and duvets you’ll be snug and cosy come the night time.

It’s only two months until Nozstock- we literally cannot wait!