When we were burgled last year I spent a lot of time mentally kicking myself that we didn’t have any form of home security in place. As we pieced together the insurance claim after clearing up the mess, I couldn’t believe how much a lot of trivial little things added up to, nor how sentimental about various “valueless” items I could be. All told it took almost 4 months from returning home that evening to the point where the claim was paid out and I vowed to make our house less attractive to the light fingered fraternity going forwards.

The first thing we did was install a burglar alarm, with sensors on all the windows and several motion sensors dotted around the house. This made me feel safer going forwards but when the chap two doors down was burgled a couple of months later, the police officer doing the door to door asked if we had any CCTV. My answer was no but the question I asked myself was why? Wireless IP webcams are ridiculously affordable now it seemed like another potential element to fortress home. I bought a couple of D Link DCS 932L cameras and crafted a home-made external enclosure for one. You can read about my exploits here. 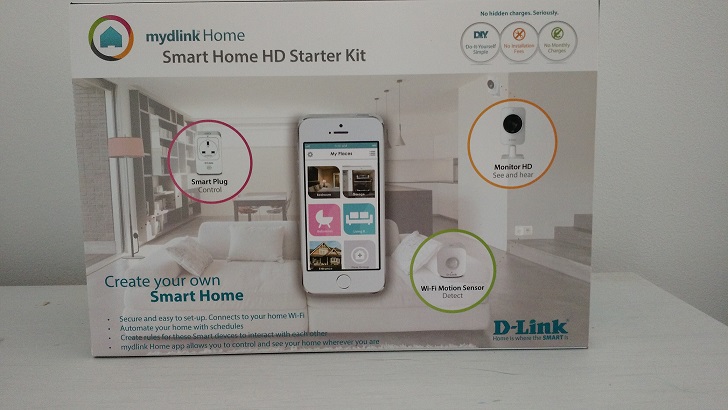 However around the same time D-Link contacted me directly and offered the opportunity to review their MyDlink Home Smart Home HD Starter Kit, so I thought I’d give that a shot too. The kit itself comprises of three items; a smart plug, a motion sensor and a camera. The camera is significantly better than the ones I bought, and they weren’t shoddy either. But the really clever thing comes on how the individual components can interact on the MyDlink platform:

That’s right, you could, if you wanted to (and it’s very easy to do), set the motion sensor to trigger an alarm to you and just use the smart plug to put a light on a timer BUT you can also get the two components to play nicely together so, for example, if a window/door is opened, the radio comes on at full volume. How clever is that? Very clever. When I get a moment, I’m going up in to the loft to dig out our old mains powered tap deck. I intend to put Robocop’s ED-209’s “You have 20 seconds to comply.” speech on tape, so when the sensor is tripped, the tape player is turned on to belt that out at full volume. Should be good for scaring the kids witless if nothing else!

As befits a higher end bundle, there is a more advanced app called Mydlink Home that works with a plethora of compatible devices. In theory the app should allow a seamless set up- following the on screen guide to press a couple of buttons to get your device onto your home WiFi network. In practice it took a little bit more faffing about to get this sorted- partly my fault as I hadn’t written down the SSID password which was on the back of the sensor before I plugged it in (the WPS one touch connect didn’t work for some reason) but partly because the devices didn’t seem to want to do what they should have. I was stuck with flashing green lights when I should have had either flashing orange or solid green. Still, I got them connected in the end via the alternative method, which was simple to follow and didn’t require a degree in comms and networking to figure out or anything.

As the basis of an easy to use off the shelf security system, I’m pretty impressed with the Dlink Home Surveillance Kit. Unlike a lot of other set ups, you don’t need a PC constantly running with a monitoring programme on it; you can do it all via the app, in or away from your home. The camera can be set up to send an email when it detects motion, and you can set the sensitivity and “active” detection area via the app. It would be nice if it sent a still image of the motion it detected but I haven’t found a way to do that. The night vision on the camera is exceptional; I can’t believe how far on the technology has come since I last played around with IP cameras around 8 years ago.

Delving a little deeper under the bonnet, if you log in to the camera itself via it’s ip address, you have a wealth of other options, including automatic uploading of video to a NAS (network attached storage) box, which is what I’ve done so we get a log of traffic past the house. The only downside of the app itself is if you’re using like I am, the app is running quite intensively in the background and does drain the battery faster than normal. I could of course turn the notifications off for this camera while leaving it on for the ones detecting motion over the flat roofs, something I’ll probably do as I fine tune my settings.

You can pick up the kit for around £120 if you shop around, which considering the camera retails for £75+, the smart plug £35 and the sensor £25 strikes me as a fair price. Adding additional devices to the system is very easy, just make sure they are Smart Home compatible!