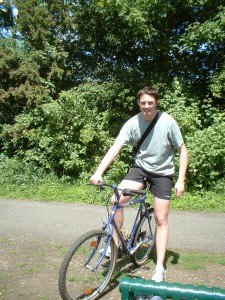 me, a very long time ago

Now that the two eldest can cycle very well, and Ned can sit happily in the toddler seat on the back of wifey’s bike, it’s time to turn the attention back to me a bit. Ironically out of all of us, I used to be the most confident cyclist but with my old boneshaker, I’m the one most in need of a new bike. When I was younger I often went out for hours at a time, covering 40 or 50 miles during a nice sunny day in the school holidays.

I kept it going at university; cycling around a lot saved on bus fares, which meant more money for beer (of course) but once I got my nose well and truly to the grindstone at work, only the occasional day out saw me on a bike. It wasn’t until wifey picked up a bike around ten years ago that we went out even semi regularly, and then when the kids came along it all stopped again.

So today we have the odd situation where the kids and wifey all have quite nice front suspension mountain bikes and I’ve still got my rigid Giant mountain bike that I got in 1989. It’s seen some ludicrous mileage, including the London to Cambridge, which I did for charity in the early 90’s.

Of course one of the things that’s changed since I was a kid, seeing if I could cycle the half a mile round the local estate hands-free, is the safety stuff. I’ve never owned a cycle helmet, let alone worn one but since I expect the kids to wear one (and to be fair, we even made them wear helmets when they were zipping around on a scooter), it would be hypocritical of me to not wear one myself. I’ve had my eye on something like the Fox Flux helmet, since I spotted some reviews saying it was the least dork looking option out there. I mean, the boy has a Marvel superheroes helmet but can you get something similar in an adult size? Can you heck.

The one thing I’m not looking forward to when I get back in the saddle is the saddle soreness. Back at the height of my cycling, I must have had inner thighs like a rhino but now the prospect of an hour on my bike delivers an anticipatory wince. Oh well!