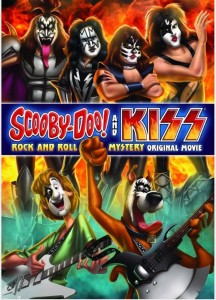 Kiss are probably due a turn in a kids animated film, they’re the self appointed kings of merch, and even though the kids had never heard of Kiss before, they soon took to them. Although Kiss are pretty timeless in their appeal, there is something inherently 70’s about them and that fits well with the 70’s vibe Scooby-Doo gives off. The Kiss characters are voiced by the band members and all the usual suspects from the animated adventures return to voice the Scooby Gang.

The story sees some sort of metallic witch terrorising the Kiss theme park, with the gang rolling up to try and solve the mystery (as well as catching a concert and letting Daphne fully run her crush on Starchild). There are plenty of comic moments; Daphne’s crush on Starchild and Fred’s jealously are the most obvious but the comments about expensive special effects and The Demon’s (one of Kiss!) general attitude are also good for chuckles. And let’s face it, you’re not likely to see the gang on a giant flying guitar while some 70’s hairy rock music is playing again.

The proof of course is in the pudding and so here is Fifi, waxing lyrical on the matter:

Scooby-Doo! And Kiss: Rock and Roll Mystery is out today and great fun for all fans, Kiss and not, alike.