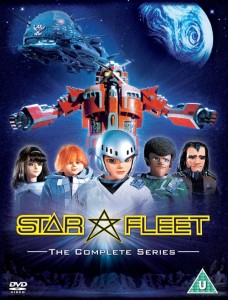 The other day when I was looking for something to watch on Amazon Prime, I stumbled across something from my youth that I’d almost entirely forgotten about- Starfleet (the English language version of Japan’s X-Bomber). I’ve never been able to find it to buy- it did come out in a £30+ boxset in 2009 but that was a lot for nostalgia- so when it appeared on my recommended tab on Amazon Prime, I almost fell out of my chair in excitement.

Starfleet originally screened on ITV in October 1982, a short while before Star Wars television première. It was a science fiction puppet show, with a story arc running over 25 episodes, aliens, a giant robot (the Dai X) and really awesome facial hair:

It was brilliant in the way a lot of kids telly back then was, only it used puppets rather than animation. People of a certain age will wax lyrical about The Mysterious Cities of Gold, Ulysses 2031, Jace and the Wheeled Warriors and even Dogtanian and the Three Muskahounds but until you’ve sat down with Starfleet, you’ve missed a treat. Brian May, from Queen, even enlisted the help of Eddie Van Halen to cover the theme tune, it was THAT awesome.

The direction is actually quite cool, especially given it’s a puppet/kids show but it is very much of it’s time; lots of dramatic zooms and pull focus work. Having said that, it’s still a good watch, even though it’s quite dated.