A quirk of being a parent blogger is that between us, Beingamummy and I have reviewed an awful lot of vacuum cleaners in the last 8 or 9 years. When Bissell, one of the premium brands in the arena of moving dirt from the floor into a storage vessel and then the rubbish bin, contacted me and asked if I wanted to review their latest and greatest cordless vacuum cleaner, I was interested. 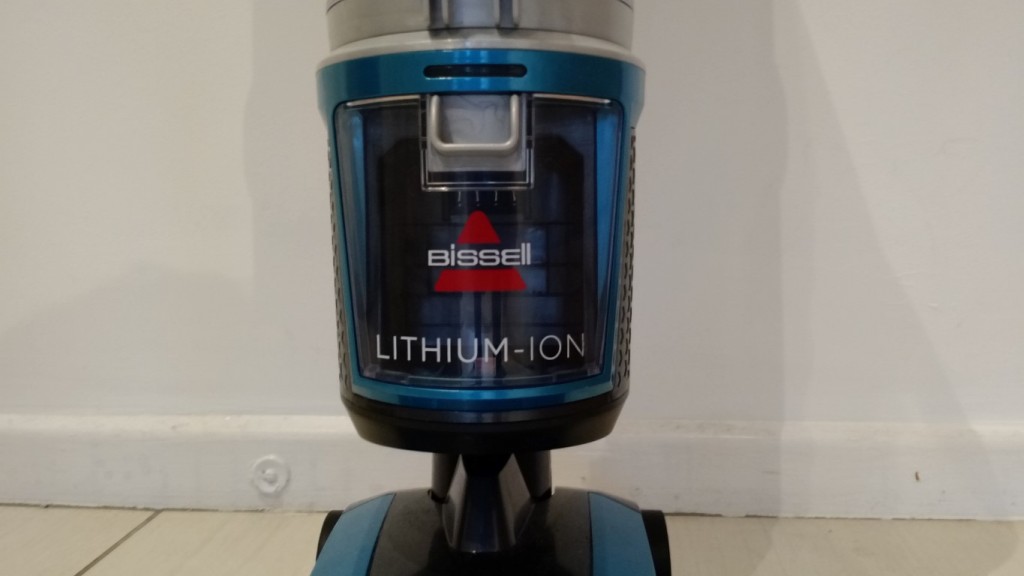 Until I saw the press release for the new addition to the Bissell PowerGlide range, the PowerGlide Cordless Vacuum Cleaner, my image of cordless cleaning focussed very much on those little handheld devices that make a lot of noise to distract you from the fact that they’re not picking up much stuff. In Contrast the PowerGlide is a proper upright vacuum cleaner, maybe three quarters the size of a mains powered device, in a rather fetching shade of blue. 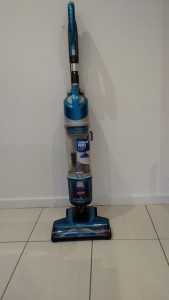 The battery sits in a compartment that’s covered by a removable flap. The flap isn’t hinged, so you can’t break the hinge (obviously) but it does mean you have to remember where you’ve put the flap when you take the battery out to charge. How often you have to take the battery out to charge will vary depending on the floor you’re looking to clean. If you have mainly hard floors, you’ll get around 45 minutes off a charge, which is pretty reasonable and enough for a good week of cleaning in a house with three kids. If you have, like us, mainly carpets, you’ll get considerably less, depending on how luxuriant your shag is. We were getting around 2-3 days of use between charges on almost exclusively carpet, which wasn’t bad at all.

Of course the battery life would be pretty meaningless if the PowerGlide behaved like pretty much every other cordless vacuum cleaner we’ve ever set eyes on (you remember, the ones that make noise to disguise the fact they’re a bit rubbish). Fortunately the PowerGlide’s size in comparison to the trad cordless cleaners is it’s trump card- it allows for a better form factor- a larger battery and a more traditional vacuum cleaner set up. 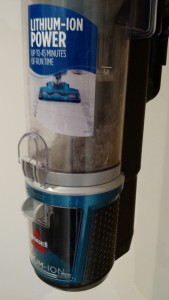 Out of all the cleaners we’ve tested over the years between us, and the ones we’ve actually bought, the one I’ve been most impressed with in terms of picking up stuff has been our bright yellow Karcher (and we’ve owned Miele, VAX, Bosch, Morphy Richards amongst others). The PowerGlide comes damn close to being as good as the Karcher when it comes to picking up dirt. Bear in mind that the mains driven Karcher is powered by a 1400W motor and that’s even more impressive.

Of course the Karcher is hampered by a short flex, short enough that to clean the sitting room it has to be plugged in to two different sockets, with another for the hallway. Given this faff, we’ve found ourselves using the PowerGlide instead, as it’s quicker and doesn’t give a noticeably different clean in much less time.

In addition to working as a standard upright cleaner, the hose detaches for spot cleaning. This is obviously useful for sucking popcorn out of the sofa but the PowerGlide goes one step further, allowing you to detach the bottom with the press of a button. This is one less thing to bang against your shins when you’re cleaning the stairs. With everything plugged in, the PowerGlide weighs 5KG, taking the brush off the end probably knocks around a kilo off that weight, making it eminently portable. 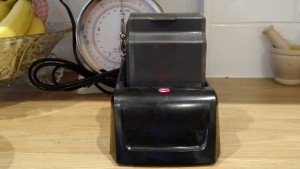 At the end of the day, eschewing mains power is always going to be a compromise but we think that Bissell have hit the sweet spot- the battery life for carpet owners is satisfactory, the suction power is good and the usability is great, especially if you’ve come from a short flex mains machine. This particular model, the 1538A, retails for £249.99, which represents the engineering that’s gone into the design. Price wise it’s comparable with the top end Vax cordless, and some of the cheaper Mieles, so it’s well priced for what it is. You can read more about the technical specifications on the Bissell website.