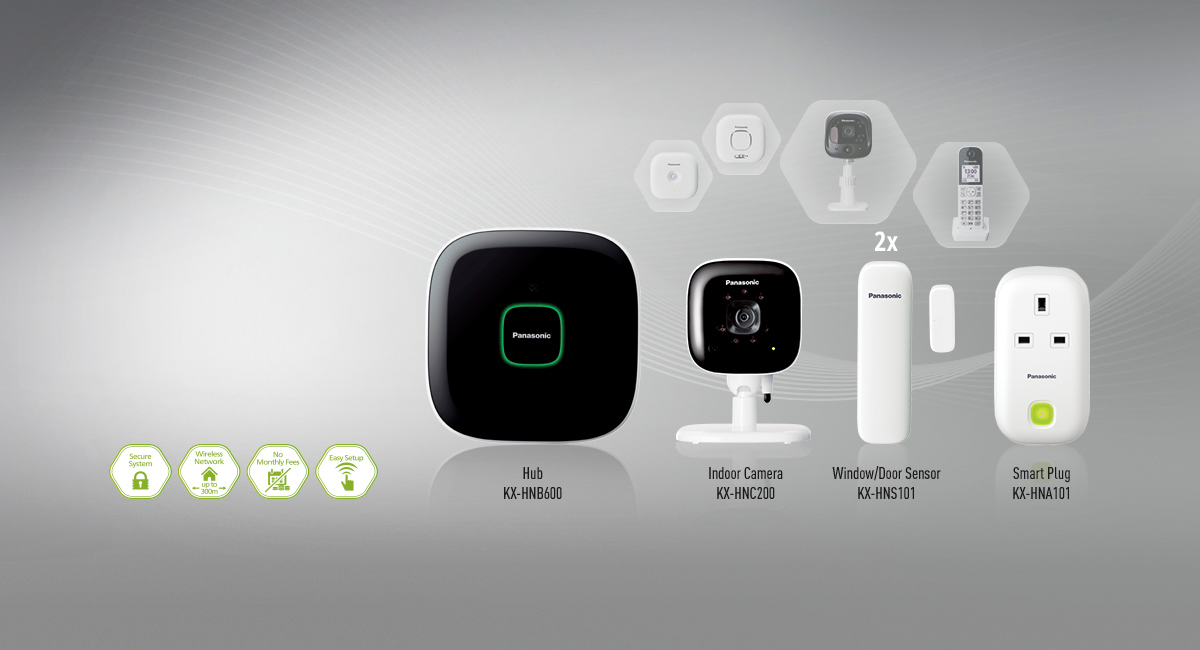 Ever since we were burgled last year, I’ve been more and more aware of home security. Despite not replacing the majority of what was taken, we’re still a risk from the same burglars as they apparently often come back once the dust has settled and they think people have nice shiny new stuff. I’m not daft enough to think that anybody can genuinely make their home secure enough to stop a determined individual getting in but it only has to be harder to get in to than the house next door in reality.

To that end we now have a Yale burglar alarm and a network of motion sensitive wireless camera, as well as some security lights. When Panasonic contacted me and asked if I’d like to review their Smart Home Monitoring & Control Kit, I thought it would be a good chance to augment our system.

The system comprises a control hub, two wireless door/window sensors, a wireless webcam and a smart plug. Initial set up is easy, which is either just as well as the manual is very brief or the manual is very brief because it’s easy; I’m not entirely sure at this stage. Nevertheless, it’s simply a case of plugging the hub into the power and your router, downloading the smartphone app and following the onscreen instructions to get it connected to your WiFi network. I must admit I never like this step using Android, I did it recently with a portable wireless storage device and it seemed to confuse the heck out of my phone’s wireless settings. I fared a little better here and it didn’t take too long. Once you have the hub set up and registered, the ring of light turns from yellow to green, indicating its set up properly. This in itself confused me a little when it came to setting my wife’s phone up on the hub as I still had to go through the “initialisation” process to add something to a hub that was already initialised. Still, I got there soon enough and it’s been fine since.

The window sensors are easy to install in a variety of positions, with the added bonus of the ones that come with the pack already being registered to the hub. You get a little bing bong when they’re installed correctly, and then they show up in the app. Best to install them one at a time, or you’ll not know which one is which- when you’ve installed them, you can rename them. The sensors have a little white raised arrow on the white plastic to let you line the two bits up, which works well. The sensors do come with screws but I’ve found the double sided pads work more than adequately on uPVC windows.

You get two window sensors in the pack, additional ones are £25 each, which isn’t excessively expensive; for comparison purposes the “dumb” sensors on our Yale system are £18 each. There was a voucher in the box for a free sensor on registration but that ship appears to have sailed as I received a sad message that the promotion was no longer running when I typed the address in. None the less, two sensors covers the patio and back door sufficiently, any more would simply be a bonus.

The smart plug is useful for sorting the table lamps out to give an illusion of occupancy and it’s simple to set up, in keeping with the rest of the system.

The alarm itself isn’t enormously loud- wifey set if off by accident, not realising I’d set the “alarmed at home” function but to be honest, the klaxon on the main alarm failed to elicit any response from the neighbours earlier in the year when my mum set it off, so it’s not really an issue. More importantly, the Panasonic Home Monitoring system popped up an alert on my smartphone the minute the back door was open while the alarm was still set, so I was able to flick on to the camera, which is in the same room and see wifey realise the error of her ways.

The Panasonic Home Monitoring Kit retails for £229, which is a fair price. We’ve used it to supplement an existing basic system and you could certainly spend an awful lot more on one all singing and dancing system.