I made my one brief venture in to the world of retail over the Christmas break, a trip to Cambridge for a bit of sales shopping. I won’t lie to you, it was hell on earth and it appears that this year a lot of the Boxing day sales were genuinely Boxing Day only sales. I know this as I’d been looking at a Netatmo Smart Weather Station the day before and it had been £99 in John Lewis but a day later, it was a pitiful £129, so I gave it a miss.

I tried on some coats in Fat Face and White Stuff and was rather surprised by the results. Generally, depending on the garment either XL or XXL fit me fine but trying a similar styled coat on in each store (XL in Fat Face and XXL in the White Stuff) gave a very different fit: 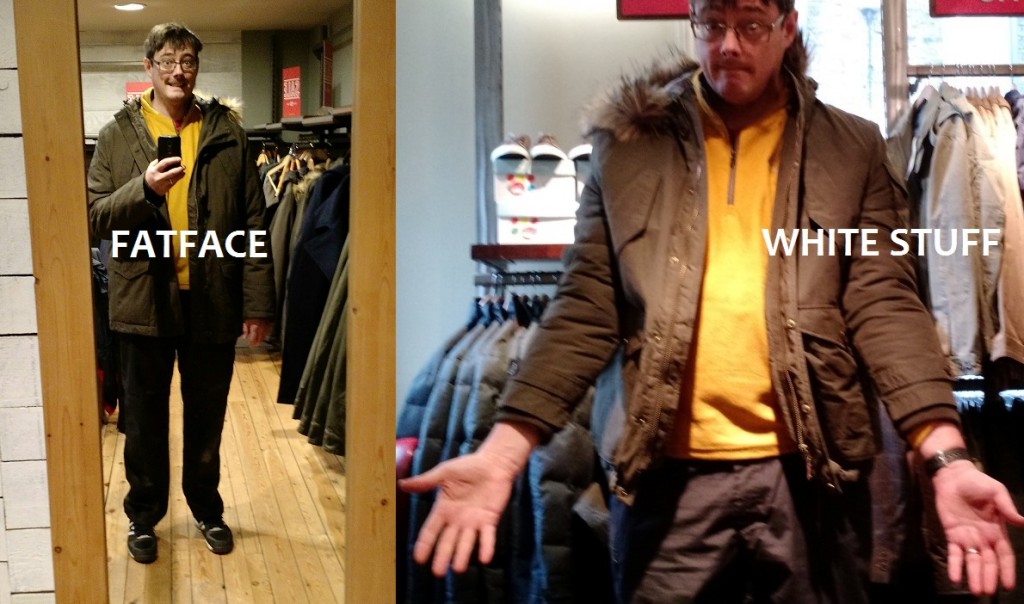 Now I am big. I’m 6ft 4 and take trousers in a 38 inch waist, with a leg just about as long as you can get but if Fat Face can understand that big people have long arms, why can’t the White Stuff? Do they make coats for short very very fat people, or are they just fighting the corner for stumpy armed giants?

Coupled with that, John Lewis broke a legally binding contract to supply a BT car speaker (I say legally binding because it had passed the invitation to treat stage, and they’d accepted my offer by taking payment), several days after I’d paid for the item, I came back from the Christmas sales with sweet FA. Thank goodness for the excellent Craghopper sale I spotted on the internet…