Nexo Knights is the new sci-fi inspired knights range from LEGO that tackles toys and video games from the completely opposite direction to LEGO Dimensions. LEGO Dimensions is a video game that has toys (LEGO figures and vehicles) that you use in game, whereas Nexo Knights are most definitely toys that you can use in the associated app. It’s a complementary rather than competitive product line.

There is also an animated TV series to accompany the line. The adventure takes place in the futuristic Kingdom of Knighton. It focuses on the Nexo Knights as they journey to defeat Jestro the evil jester, the Book of Monsters, and their lava monster army. Clay leads the Nexo Knights, which include Macy, Lance, Aaron, and Axl. Together, under their mentor Merlok 2.0, they band together to defeat Jestro. 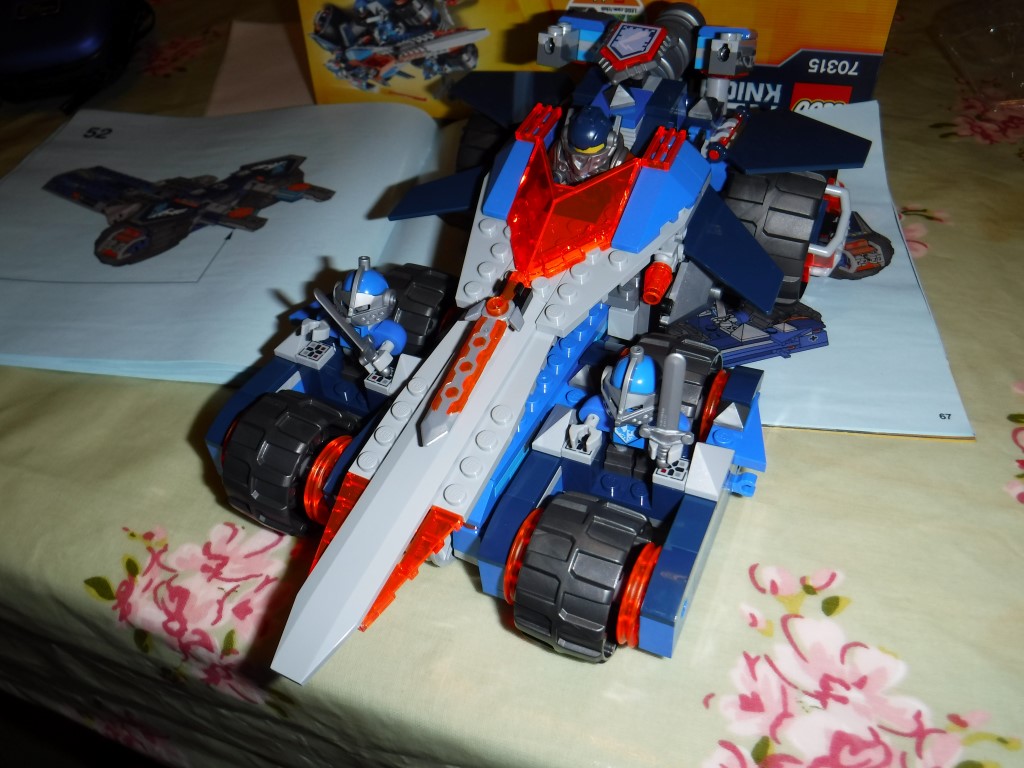 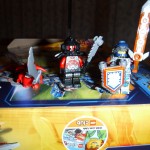 The boy build Clay’s Rumble Ride while I was at work; he moves quickly these days, and even photographed it for me too. You can see from the general style that it’s quite futuristic. I think on first impressions the Nexo Knights range do for medieval feudalism what Ninjago did for martial arts. If you think of them as sister lines, that’s probably not a million miles away from the vibe. Of course whereas Ninjago had Spinjitsu, and the battling figures, Nexo Knights has it’s app powered stuff, which is a completely different tangent. 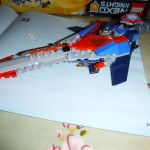 Before we have a look at the app interaction though, lets have a closer look at Clay’s Rumble Blade. It’s a complicated contraption, there are two little motorbikes that clip on to the side, and a long sword inspired spaceship that clicks on to the top of the frame. In terms of building, the spaceship is the most complicated part but the boy polished the whole thing off without the need for adult supervision. His favourite part of the whole thing is how the motorbikes clip on, although he also likes the minifigures because of their helmets and swords.

So then, on to the app, which I’ve installed on Android (IOS version available) to see what the fuss is about. The download itself isn’t that large but like a lot of games, on first boot it proceeds to download an awful lot of data and run a few diagnostics. 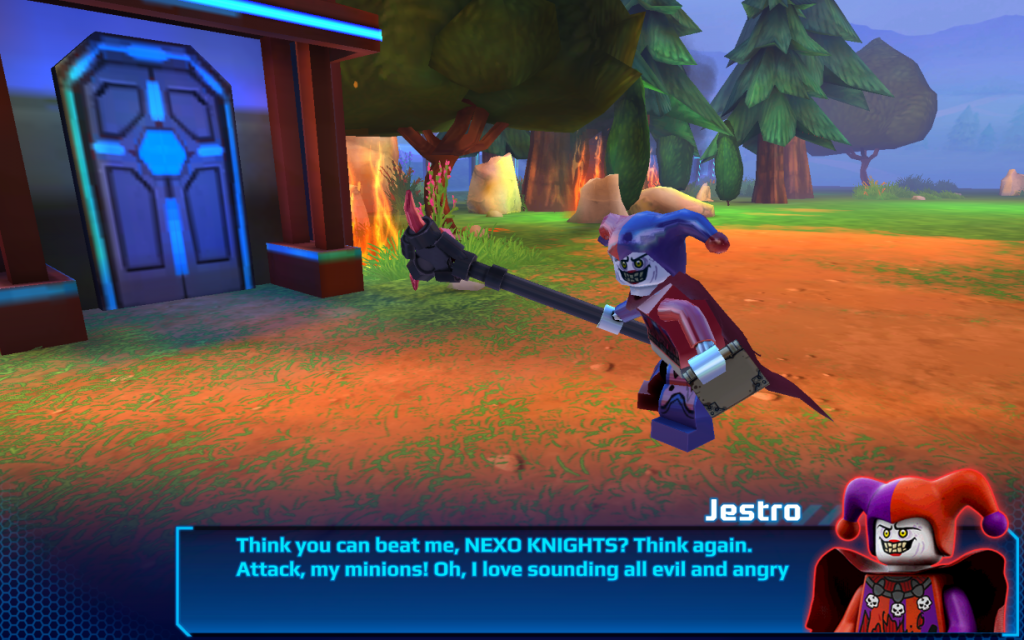 It’s understandable in the end though as the game is very pretty, probably Xbox 360/PS3 levels of pretty in fact. The game is playable without owning any of the LEGO but you get easier access to in game power ups if you have the sets and can scan the characters shields. Since you can’t screen capture a camera shot, I can’t show you exactly how the scanner works, but it definitely adds something to the game: 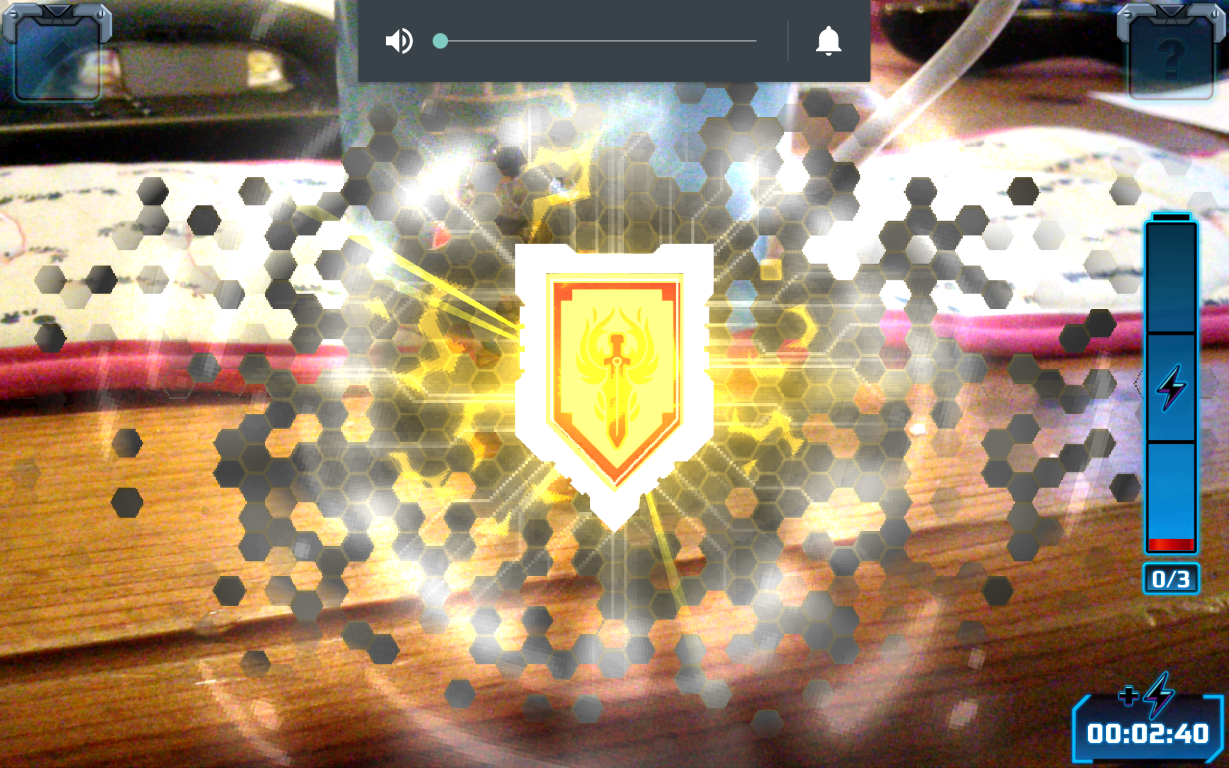 We’ve just scanned the shield held by one of our NEXO Knights. Apologies for the volume down slider!

The app is definitely a nice addition to the whole- with the addition of the cartoon as well, it gives a well realised world that kids can immerse themselves in. It’s engendered more play from the boy than he normally does with LEGO- he’s very much usually a builder who then puts his sets on display.

Clay’s Rumble Blade retails for £29.99 and the app is free. Both are available now.