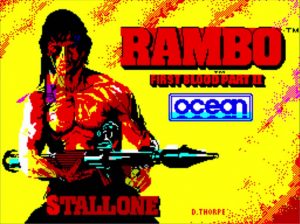 I remember when I was little having one of my few childhood play dates round Enzo’s house. Enzo wasn’t particularly a friend but he had admitted to completing the Rambo First Blood videogame. I was hopelessly stuck on the Spectrum version of it at one point but Enzo said he knew how to get round the problem. The fact that he had the Amstrad CPC version didn’t occur to me at the time but when I got round his house I found it was a very different game- bright, colourful and much much slower. Turns out Enzo wasn’t doing anything different to me but he had the benefit of not needing twitch reflexes to progress.

Moving on a generation or three, I managed to get some of my tips published in a Playstation magazine for Metal Gear Solid. The game was only available on Japanese import at that time and since the world wide web was still in it’s infancy, there weren’t any hints and tips websites available- if you shouted I want cheats, you had to either suss them yourselves or wait for a magazine to help you out.

Some games, like the Day of the Tentacle or the Discworld adventure game, had puzzles in them so fiendish that the only way I could actually finish them was by waiting for a magazine to do a walk through. Madness.

Now days things are a bit different though. Firstly it’s a lot easier to grab stuff off the internet, and walk throughs are often up as soon as the game is out. Secondly, and the real game changer, is YouTube. You don’t have to read an abstract description of what to do, you can actually watch someone physically doing it. We’ve needed a bit of help at various points in LEGO Marvel’s Avengers, LEGO Marvel Superheroes and LEGO Batman 3 to guide us what to do next and I will admit there was one point in Rise of the Tomb Raider recently that foiled me to the point I had to look to see what to do- turns out I’d missed a beam to swing off that was behind me. Doh.

Back in my youth I’d have sneered at people using cheats but to be honest, with time as finite as it is for playing stuff, there’s precious little point in getting hopelessly stuck and if I’ve paid to buy something, it makes more sense to get my value out of it than give up because I’m stuck.