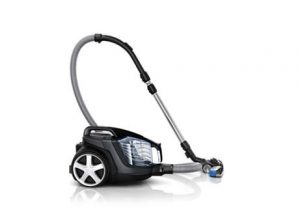 My wife and I have 16 years of parent blogging between us but if you asked us all those years ago which product we’d end up reviewing the most, I’d have been surprised if the answer came back as vacuum cleaners but we’ve reviewed over ten of them between us, and now I’m on the road to upping that to a round dozen with the Philips FC9920/69, a cylinder cleaner that Philips have kindly sent us for review.

I have a tick list for vacuum cleaners that shouldn’t be too difficult to fulfil but at the same time seems very hard for most manufacturers to get right.

For me a vacuum needs to be:

I hope you’re impressed with my correct use of the semi colon in a bullet list, a lot of time and effort goes into these posts. Anyway, prior to this I think the closest we’ve come to an ideal vacuum came from Karcher and was bright yellow. This vacuum is better, quite a lot better, but then it would need to be for the price differential I suppose.

We liked the Karcher, and have used it since review as our main vacuum because it seems bomb proof (although the power tool function seems to have stopped working recently), and sucks brilliantly. We didn’t like it’s short power cable or the relatively stone age cleaning head that doesn’t even have wheels and has a tendency to clog with hair. 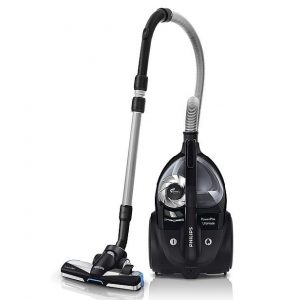 The suction power on the Philips FC9920/69 seems better, the build quality seems equally bomb proof (it’s still working after almost a month of constant use) and more importantly it has both a long hose and a very long flex. Our house dates back to the early 1970’s and back then, believe me, nobody envisaged the number of plugs we’d need to plug in 45 years later. Unplugging anything is often a lottery, so not really having to do it at all while cleaning is a definite bonus.

As well as picking up NERF darts with no issues, the Philips FC9920/69 also chews it’s way through food the kids drop on the floor, soil (don’t ask), and cat hair, thanks to it’s HEPA 13 filter. I’m mildly allergic to our cat, so having something that is guaranteed to pick up his fur is a definite bonus.

Despite being “only” 650W, I can’t fault the pick up power of the Philips.

So in terms of cleaning, the Philips FC9920/69 is better than the best we’ve had. Where does it sit in terms of price? RRP is £310 but Amazon have it for £268 at the moment. That puts it bang in the same price category as the equivalents from Miele, SEBO, AEG, Bosch and VAX. We used to own the Miele equivalent (their cat & dog, which wasn’t bagless) and the build quality wasn’t as good- there were a few fiddly little things that were prone to falling off- so I think the price, whilst a lot, is not unreasonable for what you’re getting in terms of the Philips FC9920/69.

For me, it’s now our vacuum of choice, which is about as high praise as I can give. Now, if you excuse me, I need to clean under the sofas…