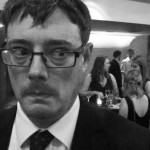 I think of it as “Daddy Pig Syndrome“- the expectation that men will be bumblingly hopeless at all things parental. Although I’ve named it after Peppa Pig, a show I had a lot of time for (and spent a lot of time watching when the kids were younger too), Hollywood has made an entire genre out of it, from Three Men and a Baby right up to more recent stuff like Chef. It’s Daddy Pig that really encapsulates it for me though, well meaning, a loving parent, but utterly hopeless at it all, with a clever wife who puts up with his inability to do absolutely anything outside of the office to

It’s sort of an extension of “idiot-at-household-chores-man“, the informal superhero created by the advertising execs at every cleaning product brand in existence. You know, the man who gormlessly uses a lesser brand cleaner to scrub the cooker top when his much cleverer wife simply sprays it and wipes it off as though friction was an abstract construct that doesn’t apply to cleaning.

Picking it apart further though, you can probably get back to the (unintended heart?) of the stereotype as something that is bizarrely derogatory to women. Women are paid less for doing the same work, given less respect for doing more than a man could do in a similar circumstance, so inconsequential areas where the perception is that a woman could to do better than a man (cleaning? REALLY?) are built up as part of the inherent patriarchal hegemony.

The implicit idea that women are better at cleaning or staying at home looking after kids while the man does the important stuff is more insulting to women than the bumbling idiot dad is to men in  the scheme of things.

Doesn’t stop it being effing irritating when some woman makes a comment when I’m out with my three on my own though!