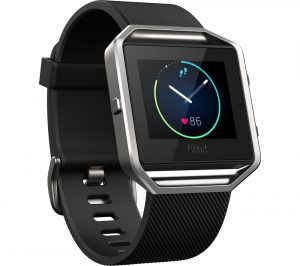 Since the weather has taken a turn for the better, it’s sudden less of a chore to be outside again, and thoughts once more turn to getting fitter. I’ve cancelled my gym membership as the logistics of actually going to the gym have been much complicated by the addition of Brownies and drumming lessons. I should make it clear at this point that I act as a taxi service for both; I am neither a Brownie myself, nor a drummer and as such have no desire to die in a bizarre gardening accident*.

So when Curry’s offered me the opportunity to road test the Fitbit Blaze, a sort of smartwatch/activity tracker hybrid, I decided it was an offer too good to resit. Synchronicity and all that had conspired to make me the ideal lab rat in this instance.

The Blaze sits half way between a full on GPS activity tracker and a smart watch like the Pebble Time or Apple Watch. It can handle some notifications from your smartphone, like email and texts, and it can also control the volume etc from music apps like Spotify but it doesn’t quite go as far as having the full monty of notifications available- for example my Pebble lets me know when I get an @ from someone on Twitter. 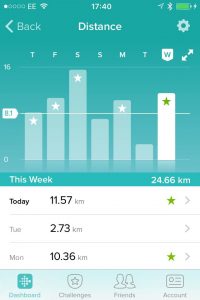 The design is well thought out, the screen is touch sensitive and also has three buttons for additional quick access to various functions. The connected app you install on your smartphone is stable and doesn’t muck about not detecting the device, which believe it or not is quite a common issue with a lot of connected fitness trackers.

The Blaze itself doesn’t have a GPS module; it borrows it from your smartphone via Bluetooth. This manages to keep the battery life remarkably long. In fact up to five days, depending on the amount of running you do (it might not have GPS but the constant connection via BT to keep the GPS data up to date obviously drains the battery faster if you’re out running). It’s a combination that works quite well to be honest. I’ve got a Withings Pulse Ox strapped to my belt but I usually fire up Runkeeper when I go for a run since step based apps aren’t as useful in terms of speed, splits, route and accuracy as a GPS based tracker. The Fitbit Blaze manages to combine a step based activity tracker with the ability to piggyback onto your phone for a proper GPS run tracker and it’s really rather clever. 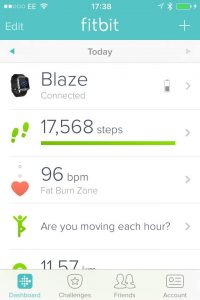 The Fitbit Blaze does have a couple of minor downsides though. The charging cradle seems a little bit delicate. It’s not fiddly to use and the lozenger shaped smartwatch bit pops out of the strap easily enough but I can see myself breaking the hinge on the charging cradle sooner rather than later.

Like most devices with a heart rate sensor, the Blaze isn’t waterproof either, so it’s no good for activity tracking in a swimming pool. To be fair, my Withings Ox Pulse isn’t waterproof either but that was and is considerably cheaper than the Fitbit Blaze. It’s a shame as it stops it being the complete one stop solution to tracking.

The heart rate monitoring seems a little up and down and I wouldn’t rely on it too much from what I’ve read either but overall, considering the price of £159.99, the Fitbit Blaze is a pretty solid device, filling in nicely between a smartwatch and a full on activity tracker. Considering you can spend anything up to over £300 on something like the Withings Activité or something similar with GPS (and perhaps a battery life under 10 hours as a result), the Fitbit Blaze is a stylish and functional device at a keen price.