We were invited to Butlins Skegness to attend their The Astonishing Family Science Weekend a couple of weekends ago. It was a blast, and much more fun than we could have possibly imagined.

I’m quite bad at not reading up or planning ahead when we go places, and this was never more evident when we rocked in to Skegness Butlin’s fifteen minutes after the food stopped being served. Still, we did pretty good time for a Friday evening, so I couldn’t complain too much.

This was the first time we’d taken the kids to the Skegness resort, we’ve been to the Bognor Regis Butlins on numerous occasions in the past 7 years but never made it North. For me, this was a return visit after a gap of over 20 years. The place was pretty much unrecognisable. Butlins in Skegness covers a truly vast area, and despite seeing an awful lot of people walking about, it never felt over crowded, even in the swimming pool(s). 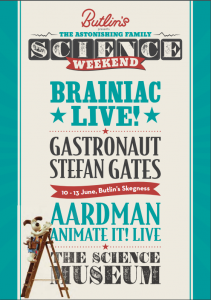 We found out in the best possible way that when Butlins do a Science Weekend, they really do a science weekend. By the end of the weekend we were exhausted but we weren’t scienced out; we could have done more and were disappointed when we saw them taking the stuff down in the early Sunday evening. That’s a good indication of a top weekend in my book.

Probably the highlight of the weekend was the Brainiac Live show. This is based on the popular CBBC show, and was a brilliant mix of science based stunts (running through stuff, fire extinguisher powered chair spinning, that sort of stuff), with some great humour and decent science. The theatre was completely packed and it was definite the marquee event of the weekend. I almost wet myself laughing at a piece on misheard lyrics, which ended with this video being played:

I almost died I was laughing so much. 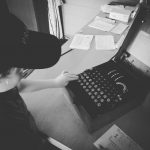 But it was ultimately about much more than simply passively watching stuff. We went to a Code Breaking session run by Bletchley Park, that saw the boy and me get to use an actual Enigma Machine to decode something. Not a replica, or a prop, an actual machine that was used in the war to encode secret messages. It may have also been used by Benedict Cumberbatch in some film about Alan Turing but that was as exciting. 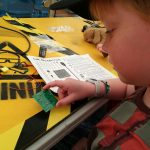 We also watched an eyeball dissection and even got to hold the eyeball (yuck!), we got to play with a lot of vintage computers, make our own lie detector (the boy’s soldering skills are better than mine!), have our DNA taken, we all got to walk over custard (see the Vine video at the start) and get involved in an animation session from Aardman.

There was literally so much to do, that we ran out of time to do the things that we normally associate with Butlins like spending 9 hours in the swimming pool or so long on the rides I can’t stand up afterwards. It was in short utterly brilliant, and the best example of learning by stealth I can think of.

Butlins are running some more Astonishing Science weekends later on this year and you’d have to be bonkers not considering attending if you have kids between 6 and 14. They will get so much out of it, and there are still the usual Butlins facilities at your disposal too. You can find out more here on the Astonishing Science Weekend page.