I have long been know to use unorthodox methods for dealing with my three children. Unorthodox but entirely legal and safe, I should add. 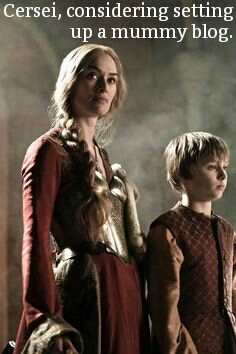 No, I’m not suggesting any parenting from the Cersei Lannister school of mothering, The Caitlin Stark approach or indeed pretty much anything from Game of Thrones/A Song of Ice and Fire.

No, I’m going relatively old school with the bits of epic fantasy I’m gleaning my parenting skills from.

Since I’m 41 now, a lot of the epic fantasy I read in the 80’s was written before the current obsession with gritty violence. The movement itself has been coined Grimdark, and contains a fairly diverse bunch of authors, from Game of Thrones author Martin, to guys like Joe Abercrombie, who wrote the brilliant First Law novels (but does come across as a bit needy on social media).

So without further ado, I’m going to plunge into the epic fantasy of my youth for some parenting tips. I make no apology for the twee nature of some of the books mentioned, and I certainly wouldn’t recommend it as a reading list!

If there was a competition for trite nonsense, this series would be right up there. Today, I think it’s best viewed as YA but of course that category didn’t really exist when I was a nipper so I read them, enjoyed them and moved on. Straight on to Stephen Donaldson’s Thomas Covenant books- somebody should have told him that Grimdark wasn’t due for another 30 odd years.

There is a specific character in The Belgariad sequence of books that has an important tip, not just for parenting but for life in general. That specific character is the stolid Durnik, a blacksmith who gets swept up into the adventures of the main protagonists. But it isn’t his slow to anger, thoughtful approach (similar I suppose to Perrin in the Wheel of Time series) that is useful; it’s his approach to camping and cooking on the trail.

Basically Durnik operates the policy of whoever asks who’s turn it is to cook that day, is the person who will do the cooking.

That is genius. It takes the young Garion far too long to work out why he’s done all the cooking, by which time he’s learnt teamwork, and, presumably, cooking. It works on many levels with children- whoever asks for the one remaining summer fruit lolly will always get an orange one, whoever demands (with menaces) to have their bedtime story first will get it second; the opportunities to implement Durnik’s Law are infinite.

I even use Durnik’s Law at work- I administer the office Fantasy Football League (last year we had 25 entrants out of about 75 staff), and literally the Monday after the FA Cup Final, I had a string of emails from one individual demanding their prize money. Every time I get an email, I invoke Durnik’s Law and extend the time I’ll give the prizes out by a day. 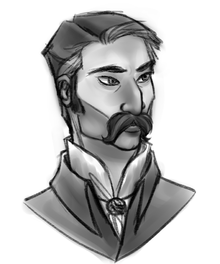 It’s my widely held belief that the 14 novel sequence the Wheel of Time is less epic fantasy, more historical romance (see my post here for the details) but even so, there is a nugget of parenting advice nestled away in the many many thousands of pages that comprise the series. The moustachioed great captain Davram Bashere is the individual to give us our pointer. And no, it’s not that having a huge ‘tache automatically makes you a great parent, (although that helps), rather that he lets his daughter Zarine/Faile make her own mistakes, whilst at the same time being there to support her when she needs to make difficult decisions.

As a parent it can be all too easy to wade in and make the best decisions for your children but they’ll not learn or grow if you do, so hats off to Davram for implicitly letting us know the best approach to dealing with headstrong children.

Caerwood ur-Mahrtiir, bit crap at pin the tail on the donkey

Unwittingly the source material for the Clench Racing game, Stephen Donaldson’s three series about a leper called Thomas Covenant and the secondary fantasy world he gets transported to are important in the realms of fantasy. Well, at least the first two are, the third less so, probably because Donaldson once said the series was definitely finished and he definitely wouldn’t return, only to come back 30 odd years later and write a third series. That, and some stupid plotting make the third sequence less memorable but also the source for the parenting inspiration.

But first a bit of history.

Thomas Covenant was a successful author who contracted leprosy and had to suffer the indignity of his wife and child leaving him on top of being an outcast in society. He had a series of trips to a different world, that he refused (for various reasons) to believe were anything other than a delusion. Stuff happened, people died, lots of clenching happened. A second series created a really imaginative take on a secondary fantasy world and more stuff happened.

One of the main antagonists in the third series is Thomas’ son Roger (belying the 1970’s origin of the series in the names!). Roger is a right evil so and so, torturing his mother, abducting kids and doing general cartoon villain stuff through out the series. But Thomas doesn’t (for the most part) judge his son, instead he takes responsibility for the way that Roger has turned out, as is every parents responsibility.

We’re all too quick to look for someone else to blame when our kids are naughty or do something that they know is wrong. We should of course accept responsibility as their moral compass and guide ourselves and ask ourselves where we’ve let them down. And then punish the little buggers.

So there you go, everything you need to up your game in parenting can be found in epic fantasy. Job done.