Voltron Legendary Defenders is now on Netflix and it’s ace. When I was little big Japanese robots were a big thing, both metaphorically and literally. We had Go-Bots, Transformers and while my brother was busy making Hurricanes and Spitfires, I was equally busy gluing giant Japanese robots together. The only problem was, my dad refused to help with the painting as he preferred Hurricanes and Spitfires.

While I might not have watched Voltron in the 80’s, Voltron himself is immediately familiar.

No, that’s not Voltron but the Black Lion, one of the five robot lions that do the ever popular thing of combining together to make a giant robot! (My all time favourite giant robot made from things combining together is the Dai X in Starfleet but that was only made out a paltry 3 spaceships.)

The above poster gives away the fact that Dreamworks is involved in Voltron Legendary Defender. This is the proverbial “good thing”, the animation is smooth and fluid, whilst keeping the spirit of the original Japanese style. If you were to bung on pretty any cartoon series made for TV in the 80’s now, you’d be shocked at the frame rate. A lot of cartoons ran at 12 frames per second, and those that didn’t often only had the backgrounds running at 24, and the characters at a lot less. Tweening- the creation of frames between “key frames” that marked a change, wasn’t really cost effective for TV and was only seen in the cinema. Consequently, I bet you’ll be surprised how jerky your childhood favourites actually are.

The plot sees a group of young human space pilots discovering the blue Lion and getting swept up in to a conflict between the evil Emperor Zarkon and the Alteans, who with their Lions that formed Voltron, were the only thing that stopped then universe being conquered.

Having human pilots enter the fray obviously allows for the exposition the viewer needs to understand what the heck is going on, and the aliens that they team up with aren’t THAT alien but it works well none the less. 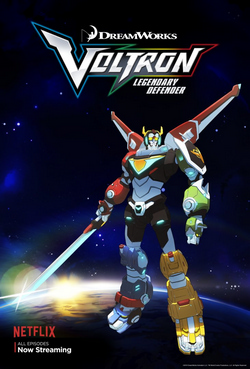 Of course the proof is in the pudding and it was with some slight trepidation I plonked the kids down in front of the telly. A couple of hours later they were most of the way through the first season of 13 episodes of Voltron Legendary Defenders- we love the way Netflix dump seasons in their entirety!

The first couple of episodes show how the pilots become the paladins- the pilots of the Lions that combine to make Voltron. The boy did query why they Lions didn’t simply be Voltron all the time as it seemed that in an arse to kick ratio that Voltron considerably outstrips the Lions but that was a minor point really.

Netflix sent us a Voltron themed goody bag which the kids have had great fun squabbling over. While they were squabbling over wristbands and baseball caps, I pumped up the Voltron branded basketball and did this:

Voltron Legendary Defender is out now on Netflix as part of a monthly subscription to the service.