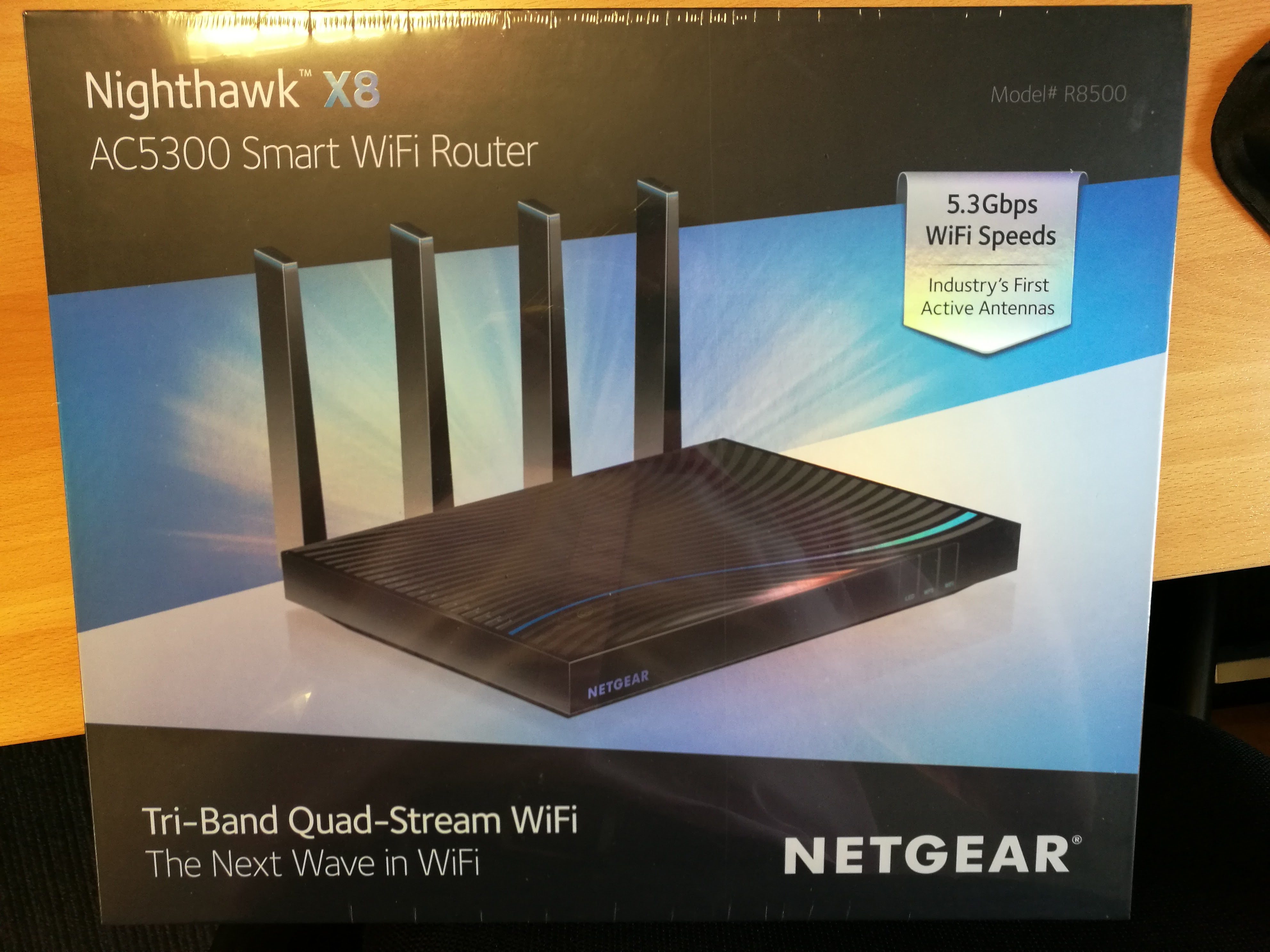 I’ve now been using the Netgear Nighthawk R8500 as my main router for two months (thanks Netgear for lending it to me for such a prolonged period), and this time has given me ample opportunity to assess it in different real life working conditions.

The Netgear Nighthawk R8500 usually retails for a rather hefty £399, but it is currently on a limited time special offer price of £299 at Amazon. That sure is a lot of money but if you think about the cost of all the devices you connect to your router, how much you pay for your internet and other subs, does it actually make sense to pay a lot less for something that doesn’t allow you to enjoy your stuff properly? That’s really the question I’m looking to answer for myself, as I look to replace the router function of my Superhub 2 on a more permanent basis.

If you haven’t read it, I wrote a post when I received the R8500 on the value of having something a step up from the usual integrated router than Virgin, BT or Sky build into their cable/ADSL modems.

If you don’t want to drag yourself away from this review to have a look at my other post, I’ll sum it up briefly- at any give point we could easily have over a dozen wireless devices connected to our router, not to mention those that are on a wired connection. That’s the reality of a modern connected house, where you might have some or all of the following:

I can say up until recently, I’ve been more than happy with our Virgin SuperHub 2 in terms of the stability of internet connection, how it handles the wired network and it’s wireless. I think the straw that broke the proverbial camels back though was the addition of three wireless security cameras that upload motion triggered video to my Google Drive account. These work 24/7 and tend to saturate the WiFi network they’re on (none are in an appropriate location to use either a proper wired connection or homeplug) at certain times of the day.

When we’re out this isn’t a problem but when we’re in, it can cause some problems for laptops and FireTV sticks, and occasionally won’t resolve itself until we’ve rebooted the Superhub. Obviously this isn’t ideal and it’s a bit pointless having an internet connection that can hit 200Mbps if the traffic on your own WiFi network is considerably slower! 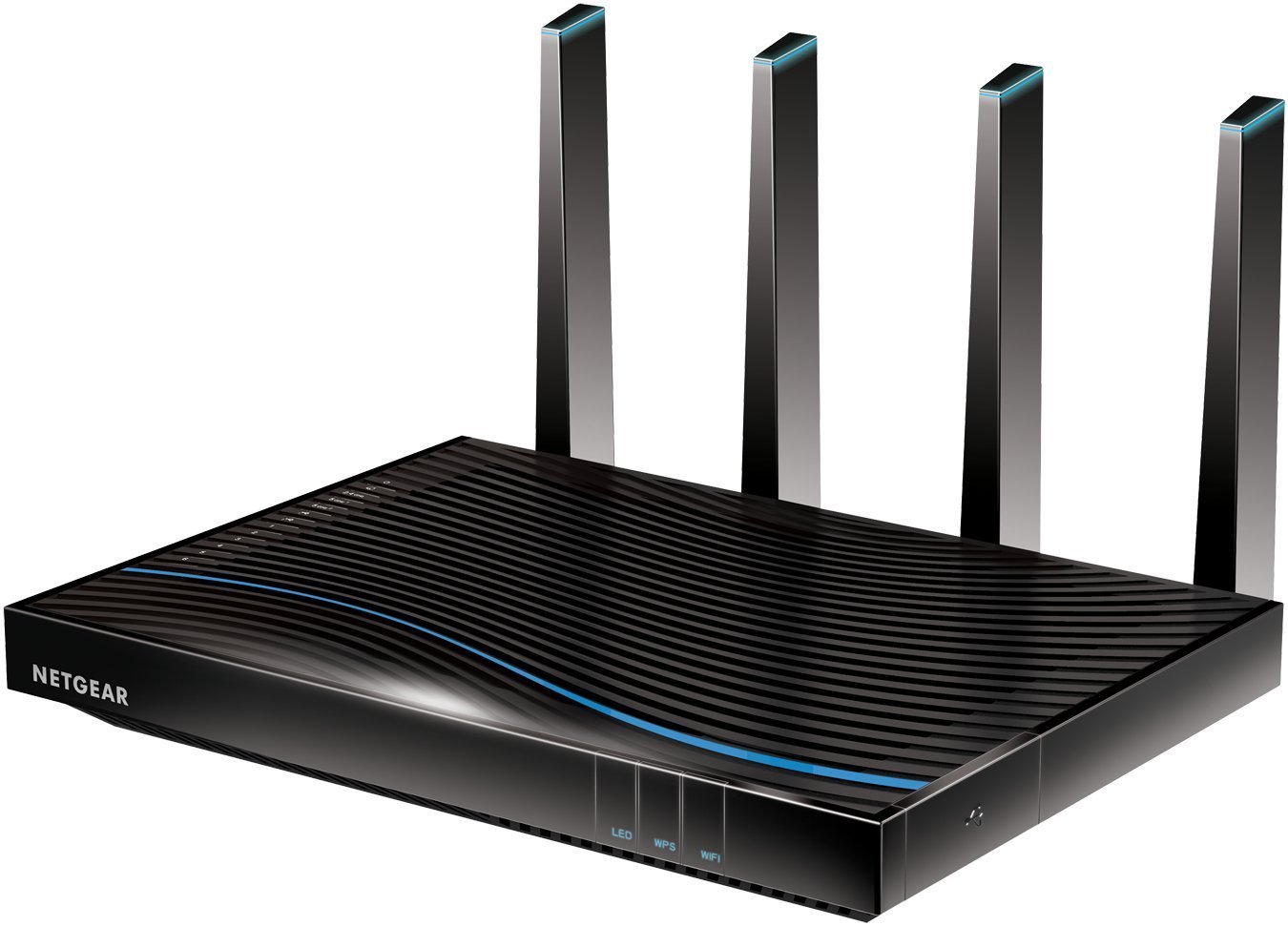 Setting up the Nighthawk R8500 was pretty straight forward. I cloned the SSID (WiFi network name) and password from our Superhub, which meant the majority of the devices happily automatically connected. One or two saw it as a new device but it was simply a case of re-entering the password on those few. After that I set the Virgin Superhub to “modem only” mode.

One of the sensible settings on the R8500 admin panel that immediately won favour with me was the ability to choose how to set the IP addresses your devices use. Routers normally use either 192.168.0.xx or 192.168.1.xx when they assign IP addresses. The Nighthawk allows you to choose between the two and since I’m going back to the Superhub soon (when I send the R8500 back to Netgear) it was nice to be able to pick and assign my NAS boxes their usual static IP addresses. I find static IP addresses useful for FTP’ing files to my NAS boxes and some services, like the SONOS local music library, need an absolute address, so if the IP changes it loses the shared file.

If that means nothing to you, don’t worry, basically it means that if you buy an R8500, it has sufficient options under the hood to tinker with the settings so everything you have will probably still automatically connect to your WiFi.

There are several things the Nighthawk R8500 does really well that I want to focus on.

The first is Dynamic QoS. QoS stands for Quality of Service and basically means you can cherry pick devices (eg a TV with Netflix) to get priority bandwidth, which is useful when somebody upstairs might be watching a streaming TV service while I’m downloading a 40GB video game on Steam. Steam is great; it usually completely saturates our 200Mbps Virgin Media internet connection to the point where nothing else works while downloading but after I turned the QoS on and set our smart TV as a high priority device, my wife was still able to watch telly without constant buffering as I downloaded some games. 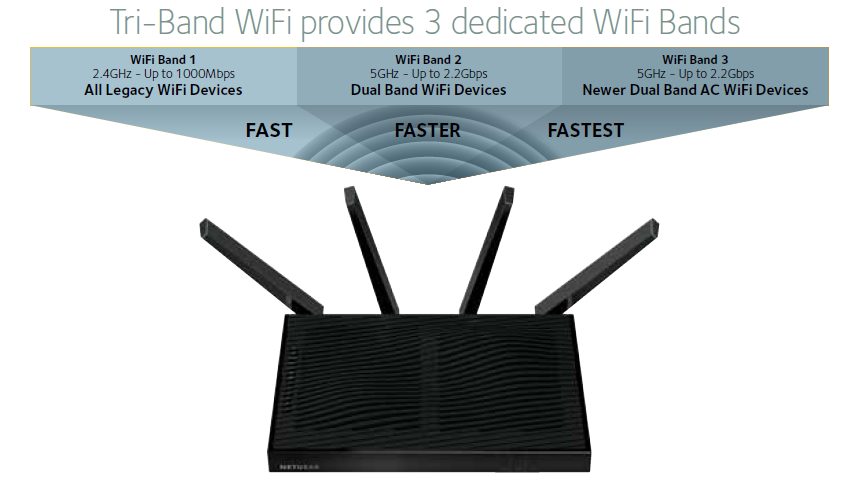 Thirdly is the range of the WiFi networks. The Netgear Nighthawk R8500 knocks anything else I’ve used out of the park. I can comfortably pick up the WiFi from our summer house, and was happily streaming music to my JBL Soundfly via my phone, when I couldn’t actually get a WiFi signal previously.

It does of course do a lot more than this, the embedded video below runs through a lot of the features above and beyond those I’ve mentioned but if I went into all of the things the R8500 can do, I’d hit 2,000+ words and you’d be here all day.

Physically the R8500 is a beast. It’s footprint is roughly the same as that of an Xbox 360, and it’s about half the height of the console. The four antenna are big and have a bright blue light on the top, which, along with the activity lights on the front, can be pretty distracting. Fortunately it’s really easy to turn all these LEDs off entirely, which means it’s not that distracting in use.

Overall I’m pretty torn. The Nighthawk R8500 has shown me that the built in router on our Virgin Superhub 2 isn’t up to the job on a number of levels. That’s no disgrace really though, the Superhub 2 is now over 3 years old and during that time the number of devices I’ve had connected simultaneously to our home network has grown if not exponentially then pretty substantially. But it comes at a price, quite a significant price really, on par with the consoles and tablets that are connected to it currently. Should a piece of home networking kit be as expensive as some of the devices it facilitates the use of?

I suppose the answer to that question falls in to the realm of the user. If I’ve spent £500+ on a 4K telly to watch stuff like Netflix and Amazon Prime Video in 4K but my home network set up at home isn’t up to it, I can either assume I’ve wasted my money on 4K when I can only manage Full HD, or I can invest in my home network to get the best out of my connected devices. The best analogy is to wonder why your Ferrari handles like a sack of spuds on the budget tyres you’ve purchased at a discount.

In the end, we’ve had no issues with buffering 4K video over WiFi since I set up the Netgear Nighthawk R8500, despite other members of the family using the internet at the same time with merry abandon, and me especially racing to fill the 2TB hard drive in my Steam PC with the latest and greatest PC games. In that situation, I think that you get what you pay for, and I’m seriously considering hitting the purchase button with Amazon for the Nighthawk R8500 at £299 for the sad day when the courier appears to pick this puppy up.