I’m stepping outside of my family to talk about the wider blogging community in this post, hold on to your hats, it’s a scary bumpy ride! This post has been prompted by endless Facebook posts about (cyber) bullying over the last year or so. The opinions here are my own, based on my views, and are not targeted at individuals because lets face it, I interact with so few of the blogging community now, whenever I meet new people, they assume I’m a newbie. As a parent who suffered physical bullying myself, I know what bullying is and what it can do to a child and I want to clear a few things up. 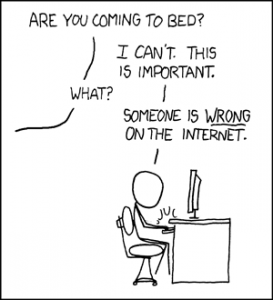 As long as I’ve been involved in the parent blogging community (that would be around 2007 vicariously and 2009 directly) people have argued the toss about everything, from bottle feeding to PSD, and more recently over who is a freebie grabbing corporate whore and who isn’t.

Disagreeing with someone is not the same as bullying. It doesn’t matter about the swears and the name calling, that is not relevant. To have a violent disagreement with someone who either has a different point of view to you or is calling you names is unpleasant but it is not necessarily bullying.

There are plenty of definitions of bullying online, from dictionary definitions like this:

but the one thing that they all have in common is the concept of an imbalance of power. Unless you pick an online fight with a celeb who then unleashes their tens of thousands of followers on you, the chances are you’re just having an argument with someone and you’re not being bullied. That’s not to belittle the upset that being on the wrong end of a slagging match can be, it can be really upsetting and make you utterly miserable. I’ve been involved in a number of these over the years because I strongly believe that there are two opinions on any given subject, my opinion and the wrong opinion.

But it’s not necessarily bullying. And it’s dangerous to call it bullying because it detracts from those that are being bullied, be it from the physically stronger kids picking on the littlest, to the gang of kids picking on the autistic kid because he is different and doesn’t know how to socially interact.

Personally I was physically bullied at school- nobody could touch me verbally because I had an acid tongue and was razor sharp with a comeback. It meant instances like the time a supply teacher was reduced to tears when a big kid on the rugby team threatened to break both my legs in class or the time I was duffed up and had snow shoved down my shirt and trousers by the same lad and his group of cronies. There was a definite imbalance of power there because despite being tall, I definitely wasn’t strong or athletic, so please, don’t lose an argument and cry you’re the victim of bullying as a result because you’re not, and it demeans the experience of those that have been the victim of actual bullying.

Respect yourself more, and take responsibility for your actions- after all you’re not that feeble that some average Joe on the internet is so much more powerful than you. Believe in yourself, have courage and conviction in what you say and if you are wrong, have the courage and commitment to admit to it. And at the end of the day, someone on the internet doesn’t like you or agree with you- so what?