Our five year old Ned has discovered flatulence in a big way. And by that I mean both the act of partaking in it’s creation and also the act of laughing hysterically at it. The joys of being five.

I am to blame for Ned’s infatuation with flatulence a little because I introduced him to the whole “pull my finger” thing. You live and learn. 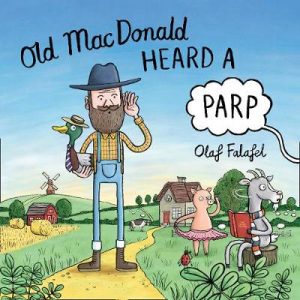 So when wifey was offered the chance to review Old MacDonald Heard a Parp, a farty interpretation of the old nursery rhyme, I thought I better pick the book up and do my own review with Ned. We’re more tuned in to the themes of the book really.

The book does exactly what it says on the tin, it’s framed around the nursery rhyme with old MacDonald attempting to guess which of his animals made the parp in the first instance. I won’t give away the final pay off but I will say it’s enormously satisfying. The art work reminds me of Axel Scheffler (sort of Super Worm era), which is no bad thing and it’s also tucked full of great little touches that make it bearable for an adult too- for example the horse has a Jurassic Pork poster and another poster that’s a spoof on Nirvana’s Nevermind album cover up in his stall).

Of course the proof in the pudding comes from the kids and honestly, Ned was a complete hysterical mess after our first read through. The book even has instructional bits on how to make raspberry sounds, which added to the tears in the eyes, snotty laughing and out of breath mess he became.

Old MacDonald Heard a Parp is out now to buy, and is published by Harper Collins with an RRP of £6.99.